Feat No 3: Multilingual Nicholas…with an extra teacher this time; Maggie

Our loud little Hercules, Nicholas, is almost three and half years old. Today and for the past two weeks, he has made great progress in his speech and we are very happy to be able to communicate with him.

It took him half a year longer than Maggie.

Nicholas started his first couple of months bilingually, using the method we had used for Maggie. Each of us had a specific language in which we communicated with the children. Kind reminder: we were still in Greece then, where we had the luxury of our families’ population and diversity and Feat No 1 was applicable even to Nicholas.

Upon arrival in Switzerland, Feat No 2 focused on Maggie. But a Feat No 3 had to be initiated for Nicholas. If we were a factory, things would have been much easier. You repeat everything in exactly the same way. But we are not a factory. We are a family. And we do not just have two children. We have Maggie and Nicholas.

Why was a different Feat to be accomplished? And what was posing an obstacle? Or what was making things easier? What was forgotten? What had changed?

* Nicholas being multilingual almost since birth. He had not yet spoken in any language when introduced to German.

* Not much exposure to German as he was an infant and was not attending school like Maggie was. He was included in German Day for DVDs and children’s programmes and he even got a taste of this, new to us all, language when Maggie had playdates. Once a week, we would invite a child from school that Maggie had chosen to play with at our home. This helped her socialize and increase her contact with German. Nicholas would benefit from this, too.

* Not much exposure to Greek either, though. Thomas was and still is the Greek-speaking parent, but when we first arrived to Zug, he worked long hours. His absence, besides other things, decreased the children’s exposure to Greek. Maggie was at an age that she could attend Greek school, however. Nicholas was not! Again Greek Day existed consistently and the phone calls and visits to and from Greece somewhat helped him grandly, we later on discovered.

* Nicholas has an older sister who knows these languages. Maggie is his teacher. His best teacher. Their main language of communication has been English from the start. This is the language – so far – that Maggie has chosen to communicate with Nicholas. (P.S. Maggie has taught him a whole lot more than just languages.)

* My patience and endurance had to work overtime. I was much more tired than when we just had Maggie. I had more things to do in the same 24-hour adventure as there were two human beings I was responsible for. And when I mentioned “strongly vocal” and “loud” to describe Nicholas, I was not joking. And neither was he. When his toddlerdom reached the age of two, he was as persistent and insistent as the-toddler-next-door, but distinctly LOUD! CAN YOU HEAR HOW LOUD HE WAS? SO LOUD that when he insisted on seeing yesterday’s dvd (which was in a specific language) the following day (which was intended for another language) … I gave in. I could not but give in. It requires great strength and effort to find a pleasant way to turn things around and sometimes I just could not do it. So I would allow Nicholas to watch the DVD of his preference in his bedroom for a few days but I would follow the proper language scheme with Maggie. And then gratefully, conscientious Eugenia would scold defeated Eugenia and make her get her act together. I made sure I slept well, had some nice cups of coffee, got into my best, most pleasant mood and almost magically put Nicholas’ language days on track again. It was not Nicholas’ fault for being a toddler but it was definitely my fault for behaving like one.

* Then Nicholas was two and a half and said just a few words in English and even fewer in Greek. However, he understood both languages very well and also some German when spoken to by adults and children of our new environment. German really had to start becoming a properly proportioned part of his life. Beyond that, it would do all of us good if Nicholas started socializing with more children, other adults and in a different environment besides our home. That is why we decided to sign him up for a morning preschool three or four times a week. Great idea. Oops! What had I forgotten? That Maggie was fully integrated in a German-speaking school. And that it was the best move. And what does Eugenia go ahead and do? I sign Nicholas up for a private bilingual (German/English) programme. Here, my educational experience saved the day. In less than six days, besides the language issue, I put together some pieces of this specific preschool educational system puzzle and discovered…that there were many pieces missing in what they were doing. We immediately removed Nicholas from those facilities, paying dearly for this decision, literally in Swiss francs, but for the benefit of Nicholas. And along with changing preschool we had the super chance to rectify and also change language strategy. We signed him up for a monolingual Swiss preschool to receive the immersion necessary for his language development.

This was the kick-off for his intense and rapid progress! Maggie was Nicholas’ interpreter. Only she could fully understand him. When Maggie was not around and I had to understand what Nicholas was saying we both really tried. Hard! He would repeat and repeat his sentence until he was absolutely sure I understood every single thing he had said. There were times that after a few attempts I still could not but would fake it and reply: Ok Nicholas! But he knew; and insisted and then I really had to try.

But then, when sometimes even his trusty Maggie would not be able to understand him, he realized that he had to say it right. He was growing and so were his thoughts. It was as if he made a deal with himself and decided to really make a statement. Not with volume increases. Not with gestures. Not with his right-hand-man (sister, in this case), Maggie. But in his own words.

Every day and every week, he made a bigger and bigger statement. And in the proper language to each person. And even started singing German songs he learnt at preschool. He started being eloquent half a year later than Maggie but is using the same beautiful expressions and special vocabulary as Maggie. What a teacher she is!

Here we must also congratulate and thank his preschool teacher who is so talented and pleasant that when we go to pick Nicholas up, the Hercules in him comes out. He physically attempts not to be taken home from school and gravity is as real as can be when trying to lift him up.

Another special thank you is awarded to Maggie and Nicholas’ caregiver at home when mom and dad are on the go. She is a really wonderful, patient and loving young lady studying to be a primary school teacher. We are sure she will be a great one. She patiently tried to understand what Nicholas was saying, even in times when his speech was like a paintbrush dipped in too many colours.

And a huge thank you to the English-speaking Grandpa, my father, who helped us last year for six whole months. He contributed not only to Nicholas’ language development but taught him how to take care of himself, be tidy …oh, and strong!

In the meantime, Maggie was really starting to get tired… Tired of Greek. But that is Feat No 4. 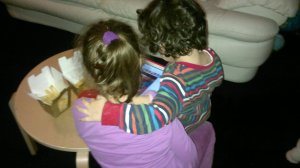 Maggie and Nicholas Feat…ing in 2013

7 thoughts on “Feat No 3: Multilingual Nicholas…with an extra teacher this time; Maggie”